Dana founded The Lion’s Beauty Queens, Inc., a grass roots faith-based survivor-led organization, outreach and support group to women in the sex industry and victims of human sex trafficking in August 2011. On her birthday in January of 2012, LBQ was incorporated in Missouri as a non-profit organization holding 501c3 status. In 2013 LBQ was registered, patent, and trademarked in the United States of America. LBQ concluded a decade of national nonprofit service with an impact in 26 clubs, 14 cities, 3 states, (MO/KS/CA) and the mission was accomplished December 2021. She is now the Founder of Girlz in the GodZone, an expanded Ministry evolving from her 10 years as founder and leader of LBQ, Inc. based in Kansas City.

She completed a Bachelor of Science Degree Program at Graceland University and graduated with honors, Phi Theta Kappa and gained licensure as a Registered Nurse in 2005. In 2015, Dana was formerly licensed and ordained as a Minister through World Harvest Church and became a member of WHC Ministerial Alliance. Now she is a fully credentialed minister with The Assemblies of God and a published author.

Dana has had a broad education in the “world” and in the “church”. As a sex-industry overcomer, she is passionate about empowering women in their healing and transformational journey! Basing her knowledge on and using her personal story and life experiences that she endured for 7 & 1/2 years in one of the darkest and rapidly growing “cultures” in the history of our society and time. She illuminates light amidst the darkness in “the world” of the sex industry. As well, her 20+ years of experience submerged in the “culture” of an ever-changing and shifting environment of “the church”. The exposure of the religious and the judgmental attitudes and positions were brought to the forefront as she viewed through the lens of sitting quietly for years as a “Pastor’s wife/Board Member’s wife” at a mega church. She knows and comprehends well the delicate balance and detailed intricacies involved with deep prospectives from both sides; the world and the church.

In 2014, Dana’s Memoir was published, Surrendered Showgirl: One Life Divinely Rescued & Powerfully Transformed from Stripper to Saint. In it she brilliantly accounts for her journey through child abuse, working in strip clubs, to leading an organization that reaches women in the sex industry on a national scale. Currently her ministry, The Lion’s Beauty Queens is reaching out to 22 strip clubs in 12 cities, and 3 states across the country, as well training several outreach teams of women.

Her second book has been published, Beauty Before Brittany: A Self-Discovery Journey & Bible Study. She is a sought after guest and speaker. In 2016 she became an approved National Speaker for Stonecroft Ministries. Dana is currently writing Girlz in the GodZone: Through the Eyes of a Missionary into the Sex Industry. 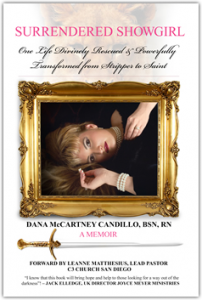 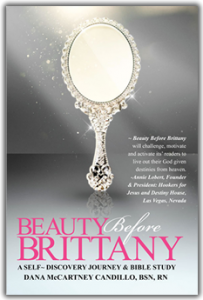 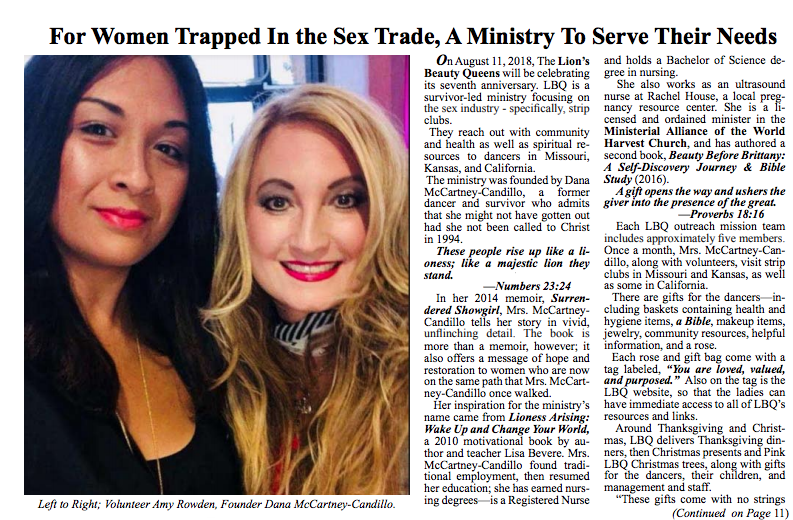